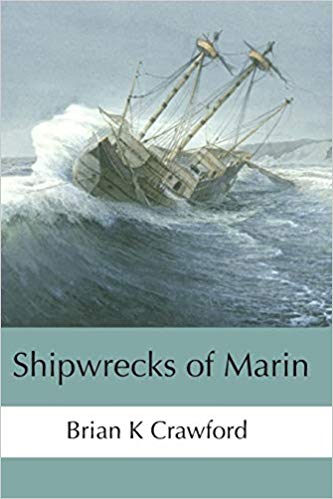 Marin County, just north of San Francisco, is a graveyard of ships. Its steep rock-bound shores, treacherous currents and frequent fogs have been the doom of hundreds of ships for over four hundred years. Local historian Brian K. Crawford has done extensive research fleshing out the details of famous wrecks from contemporary accounts, and identifying more than a hundred wrecks not documented elsewhere.

Many of these are disasters within San Francisco Bay. Many of these tales are full of danger and heroism, of pathos and high adventure. Terrified passengers cling to overturned steamers or clutch at rocks in the pounding seas. Seamen clamber up cliffs to escape certain destruction. One captain runs two ferries aground and sinks a yacht all in one day. The vessels range from Spanish treasure galleons to garbage scows, clipper ships to floating dry docks. If you love ships and the sea or tales of danger and adventure, or if you just want to know more about the many wrecks that dot our coasts, you will find this book endlessly entertaining. 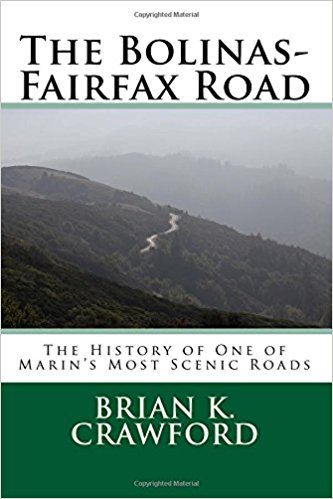 The spectacularly scenic and curvy Bolinas-Fairfax is a favorite of many Marin residents, but few know its history. Meet the men who planned it, the surveyor who designed it, and the contractors who built it. Learn about the colorful characters who ran stage lines on the road, and how the road moved and changed with the times.

Built in 1878 and originally going to San Rafael, not Fairfax, it was an important connection with the remote coast. Meet the men who planned it, the surveyor who designed it, and the contractors who built it. Learn of its many routes over the years. A racist militia attack against the Chinese laborers was narrowly averted. A stagecoach line operated on it for 37 years, run by a string of colorful characters. Mud, landslides, wild animals, earthquakes, runaways, fires, overturns, and a holdup reveal the fascinating history of this famous road. 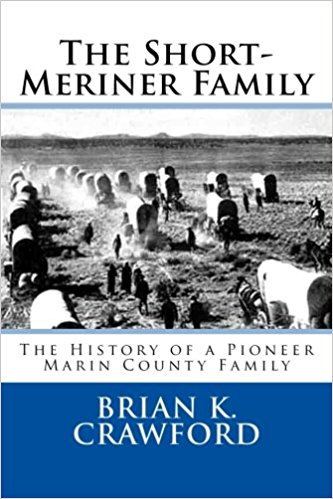 Much of San Rafael and San Anselmo were once owned by the Short brothers, Jacob and John Orey Baptiste (J. O. B.). This is the story of how the teenage brothers came to Marin by wagon train in 1846 with two young sisters and their widowed mother Jane Meriner.

A fictionalized account of the arrival in Marin County of the Short-Meriner family in 1846. The family became prominent Marin pioneers and once owned much of San Rafael and San Anselmo (including my own home). Jane Meriner, a 37-year-old widow, her two teenage sons by her first marriage, J. O. B. and Jacob Short, and her small daughters by her second husband, Elizabeth and Catherine Meriner, drove their covered wagon along the California Trail from Missouri to San Rafael. They were friends of the Donner party and traveled part of the way with them, crossing Roller Pass instead of Donner Pass and getting across just before the storm that doomed the Donners. Since there are many accounts of the California Trail, this account describes only the final part of their journey, from the end of the Trail at Johnson’s Rancho in Yolo County and across the Central Valley to the San Rafael Mission, where they lived in the abandoned buildings. 60 pages, with maps and illustrations. 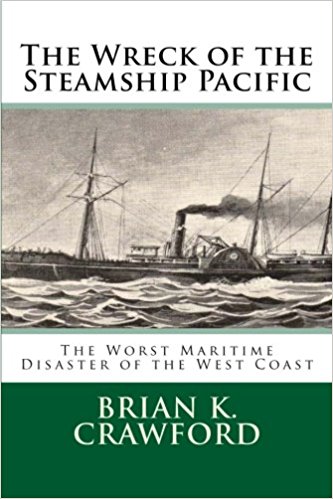 Wreck of the Steamship Pacific

The tragic story of the 1875 sinking of the steamship Pacific off Cape Flattery in Washington, with the loss of up to five hundred lives, making it the worst maritime disaster in the history of the West Coast.

On the evening of Thursday, November 4, 1875, the steamship Pacific collided with the clipper ship Orpheus off Cape Flattery in Washington. The Orpheus resumed her journey but the Pacific – old, unsafe, and dangerously overcrowded – broke up in minutes and went down, scattering hundreds of men, women, and children into the sea. Exactly how many died will never be known, but the names we know are enough to make this still the worst maritime disaster in the history of the West Coast. Only two men survived, and their first-hand accounts are here. The passengers included many wealthy and famous people, along with gold miners, singers, actors, and an equestrian troupe. One passenger had already survived three other shipwrecks on the same passage. Several were carrying large amounts of gold. The stories of how they came to be aboard that night are as interesting as the disaster itself. In period newspaper articles, letters, diaries, and mysterious notes in bottles, the tales are told.

The Captains – Jefferson Davis Howell (brother-in-law of President Jefferson Davis) of the Pacific, and Charles Sawyer of the Orpheus – were both young but very experienced. Who was at fault? Were they drunk? Could the collision have been averted, or more lives saved? Were the ships safe? Were the officers and crews and owners competent? Was there an official cover-up? Was the “last will in a bottle” genuine? We will examine the evidence.

73 pages, illustrated with photographs and drawings of the ships and participants, this volume examines all aspects of a singular disaster. The poignancy of the deaths, and the devastation felt by so many left behind, made a mark on a generation that they remembered the rest of their lives. In the impact it had on people’s lives and imaginations, the sinking of the Pacific was the Titanic of its era. 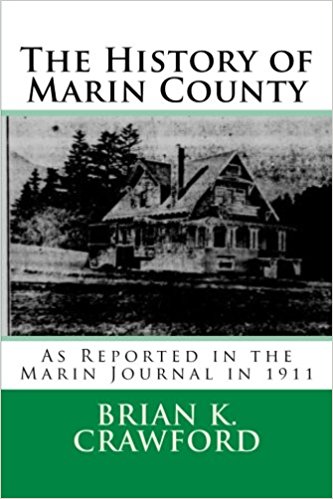 In 1911, the Marin Journal, forerunner of the Marin Independent Journal, published a special Golden Anniversary edition commemorating its first fifty years of publication. Sixteen pages long and printed on book-quality paper, the edition consisted entirely of a series of illustrated articles about each community in Marin County, each written by a local correspondent, extolling the virtues of their towns. These give an intriguing view of how local residents viewed their communities, their progress, and their hopes for the future, more than a century ago. The pride and their hopes glow through their words.

The special edition was followed by a series of weekly articles detailing the history of Marin County. While there are inaccuracies, these articles were written when many of the founding pioneers of the county were still alive, and contain much information not available elsewhere. While there are many histories of California, this series focuses on Marin County alone and describes the people and events that made the county and formed its culture.

Taken together, the special edition and the history articles give an intimate look at the county as seen by its founders and residents more than a century ago. 79 pages, with original illustrations from the newspaper. 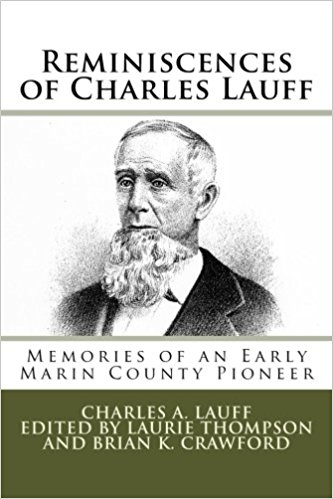 In 1916, 94-year-old Charles Lauff published a series of newspaper articles telling about his long life as one of the earliest white pioneers of Marin. He knew all the notable people of Alta California and saw the gold rush first hand. His vivid descriptions bring back the early days of California.

In 1916, at age 94, Charles August Lauff (1822- 1917) narrated the reminiscences that follow in a series of articles for the San Rafael Independent. The picture he paints of Marin County provides us with a glimpse of the County’s early topography and settlers, bringing to life the rancho era and the personalities of such original land grantees as Timothy Murphy, John Reed and William Richardson. In addition, he recounts his experiences during the Gold Rush and provides details about life in San Francisco, Sacramento and other burgeoning towns in Northern California. 73 pages, with a portrait of Lauff, a map of the Mexican land grants in Marin County, and extensively annotated. 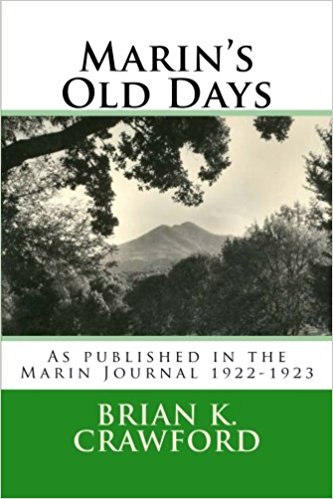 In 1922 and 1923, the Marin Journal published a series of fifty-eight articles called Marin’s Old Days, recounting the history of Marin County. This book is a reprint of the entire series.

In 1922-1923, the Marin Journal, forerunner of the Marin Independent Journal, published a series of fifty-eight articles called Marin’s Old Days, recounting the history of Marin County up to that time. While in some cases inaccurate by current knowledge, these articles reveal interesting history, fascinating pioneer characters, and the way Marin residents viewed their county over 100 years ago. 203 pages and extensively annotated.

Since moving to Marin County in 1986, I have been drawn to learning more about the fascinating history of this beautiful area. Working with local historians, libraries, online digital newspapers and genealogies, I have compiled several books about items of local history. Several are edited collections of newspaper series about the early days of Marin County, making readily available resources that, while available online, were barely readable and spread across many files. Others are just things I became curious about and decided to research and document, or odd things I came across in the old newspapers.